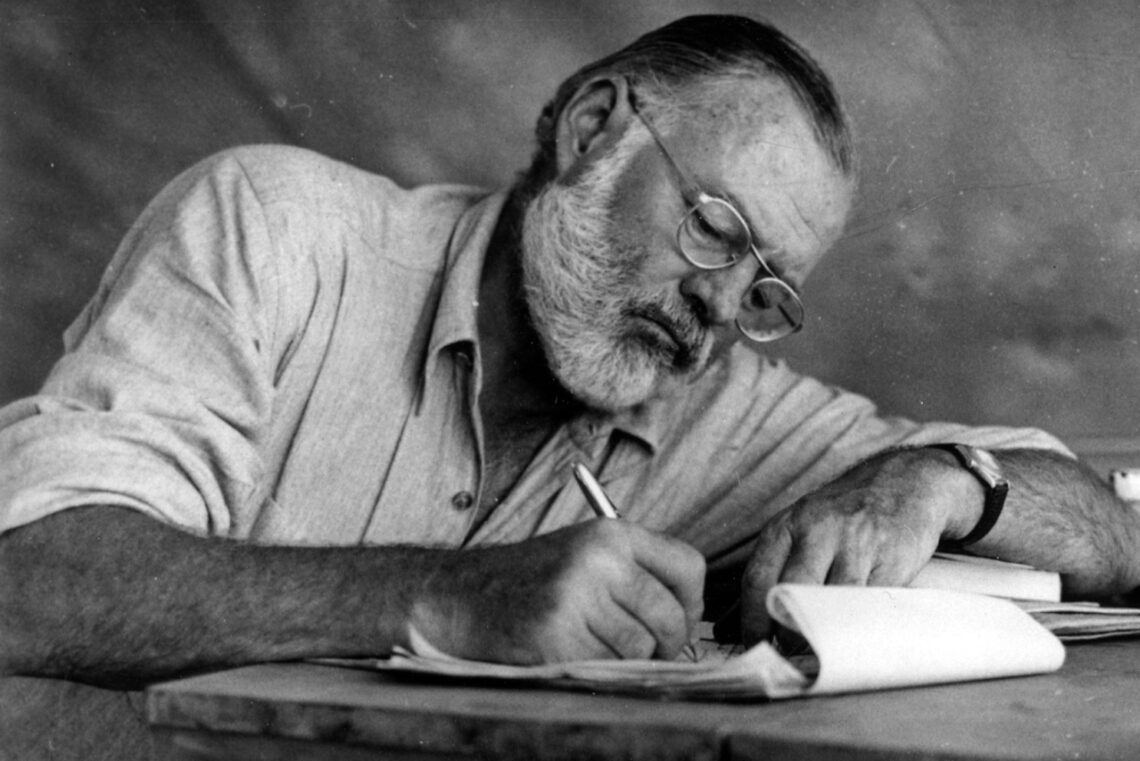 How many words should a writer produce on an average day? Well, to get a rough idea, let’s take a look at how many words some successful authors throughout history tend to produce per day.

If you’re Graham Greene, you’re stopping at precisely the moment when you hit 500 words. On the other hand, if you’re Margaret Atwood, you’re trying to aim for 1,000 to 2,000 words a day. The truth is, all of this depends

A lot of authors don’t even have daily word targets, so don’t feel like you have to. Some prefer sitting at their desk for a certain number of hours. I see the logic in this – if you aim for a certain word count, sometimes you’ll be tempted to just crank out rubbish to hit your quota. Then there’s the Neil Gaiman approach, where you simply sit at your desk for a set number of hours and can’t do anything else, except write.

We’ve compiled the below list out of curiosity. We don’t think writers need daily word counts, and we certainly don’t think you need to be producing thousands of words per day to be successful. Even if you’re just writing 100 words a day, every day, over a year that is close to 40,000 words. A massive achievement in its own right.

As the years have gone by, Stephen King’s daily writing routine has slowed down. He still writes every day, even on the weekends, but as he says, “I used to write more and I used to write faster – it’s just aging. It slows you down a little bit.” Earlier on, he used to pump out 2,000 words a day, but these days, he aims to write for about four hours each day and gets down about 1,000 words.

In an interview with The Paris Review, when asked whether he aims to hit a writing quota every day, Robert Caro replied, “I have to produce. I write down how many words I’ve done in a day. Not to the word—I count the lines. I do it as we used to do it in the newspaper business, ten words to a line. I do a lot of little things to try to make me remember it’s a job. I try to do at least three pages a day. Some days you don’t, but without some kind of quota, I think you’re fooling yourself.”

In a 2016 interview with Brian Koppelman, John Grisham described his daily writing routine; the same one that has powered his work for the past 20 odd years. “I’ll write for a couple of hours, take a break, then get back into the novel,” the best-selling author explained. “On a good day I’ll write 2,000 words. A slow day is 1,000. But you do that five days a week for six months and that’s a lot of pages, and that’s how the books are written.”

The daily word count of the American writer seemed have to fluctuated dramatically over the course of his life. As quoted in Chapters from My Autobiography, Twain recounted his writing routine for works like The Innocents Abroad and Following the Equator.

I wrote the rest of “The Innocents Abroad” in sixty days, and I could have added a fortnight’s labor with the pen and gotten along without the letters altogether. I was very young in those days, exceedingly young, marvellously young, younger than I am now, younger than I shall ever be again, by hundreds of years. I worked every night from eleven or twelve until broad day in the morning, and as I did two hundred thousand words in the sixty days, the average was more than three thousand words a day—nothing for Sir Walter Scott, nothing for Louis Stevenson, nothing for plenty of other people, but quite handsome for me. In 1897, when we were living in Tedworth Square, London, and I was writing the book called “Following the Equator” my average was eighteen hundred words a day; here in Florence (1904), my average seems to be fourteen hundred words per sitting of four or five hours.

Chapters from My Autobiography | Mark Twain

“I’d get up in the morning, have breakfast, have coffee, then go upstairs to the room where I write,” Margaret Atwood once told The Daily Beast. “I’d sit down and probably start transcribing from what I’d handwritten the day before.” On a typical writing day, the Handmaid’s Tale author usually starts working at 10am, aiming for 1,000 to 2,000 words per day. She wraps up her work at 4pm, although sometimes she’ll write into the evening, “if I’m really zipping along on a novel.”

Child aims to write 2,000 words a day, though the count can vary. “Some days I write just a couple hundred words, but if it’s crucial I feel pleased about it,” the Jack Reacher author said in an interview with Record Online. “There are so many invisible things – setting up mood, prefacing a transition. But routine narrative, I’ll write 2,000 words a day.”

Kazuo Ishiguro doesn’t write every day, but when he does, the British novelist aims for 5-6 pages per day — any more than that and he feels the quality of his writing becomes substandard. “It’s like a jazz musician who gets the best music out and then pulls out,” he explained during a Masterclass session with fellow author Richard Beard. “There’s always something else productive or administrative to be done.”

In his 1951 novel, The End of the Affair, on which Greene’s own affair with Catherine Walston was the basis for, the writer gave readers a glimpse of his creative process for writing a novel.

Over twenty years I have probably averaged five hundred words a day for five days a week. I can produce a novel in a year, and that allows time for revision and the correction of the typescript. I have always been very methodical, and when my quota of work is done I break off, even in the middle of a scene. Every now and then during the morning’s work I count what I have done and mark off the hundreds on my manuscript.

THE END OF THE AFFAIR | GRAHAM GREENE

During his novelist career, the former naval intelligence officer maintained a regimented work schedule that saw the British author write every day, with the target of 2,000 words per day. This daily schedule of producing 2,000 words a day enabled Fleming to finish a first draft of his novels within approximately six weeks. After that, he would spend a week going through and correcting the errors as well as rewriting passages. Then the manuscript was sent off to his publisher.

When it comes to Khaled Hosseini’s writing routine, the Afghan-American author told The Daily Beast back in 2012 that he typically writes between 8.30am to 2pm, precisely the hours that his kids are at school. Between those hours, he aims to get down 2-3 pages, although he admits he’ll be happy with the day’s work if he manages to write “at least three good sentences” and have an “idea of what I will write the next day.”

Speaking about his creative process in a 2009 interview with AARP, Elmore Leonard revealed that he likes to aim for 3-5 pages each writing session. “I used to aim for five clean pages in an eight-hour day,” he explained. “I’ll settle now for three in a somewhat shorter day, continuing to revise to maintain the sound I want.”

In a 2013 Q&A on Reddit, the American author of epic fantasy and science fiction replied to a fan’s question about his daily word output. The fan was lamenting the fact that he felt his own daily word count of 500-1,000 words wasn’t enough.

500-1000 words a day is perfectly reasonable. I do on average 2,500–and that is after twenty years of practice, not to mention being able to do this full time. If you can do 500 words a day five days a week, that’s a novel every year. Don’t feel this is a bad rate. Keep at it.

When Amanda Gorman was still in school, her daily writing routine was whenever she had a spare moment — like on the hour long bus commute each way. These days, as an established poet, and the first person to be named National Youth Poet Laureate, she has a more set schedule where she carves out time to write for at least 15 minutes a day, or about 300 words a day.

When Koontz is working on a novel, his typical schedule has him writing for long stretches, six days a week. “I work 10- and 11-hour days because in long sessions I fall away more completely into story and characters than I would in, say, a six-hour day,” he explained. “On good days, I might wind up with five or six pages of finished work; on bad days, a third of a page. Even five or six is not a high rate of production for a 10- or 11-hour day, but there are more good days than bad.”

As a full-time writer, Cronin treats his work just like any other job — he shows up to his office (a guest bedroom in his house above the garage) at the same time and follows a routine each day. For a typical writing session, the author likes to aim for 1,000-2,000 words per day, using a large whiteboard to map out the story.

As an author who publishes multiple novels per year, Stine sees his craft akin to putting together parts on a conveyor belt. “In two weeks I can write a Goosebumps book. It’s like factory work,” he told The Verge. “Every day I get up at like 9:30-10, I sit down and I write 2,000 words, and then I quit. Five to six days a week I write 2,000 words. It’s fast.”

When he was a younger writer, Rushdie found that he could write quickly and easily, but most of his output required a lot of re-writing. As an older man, he now writes slower, but revises as he goes along. “I used to get a lot more written in a day than I do now—four pages, five pages,” he explained to Harvard Business Review. “Now I’m doing 400 or 500 words. The difference is that the work used to need a lot of revision. Now I write much less, but it’s closer to a finished piece.”

Interview with Peter Mountford: "Your first and most important job is simply to command their attention."

Interview with Anita Felicelli: "You're juggling with one hand while miming climbing out of a well with the other."